Colleges and Universities in California

California is one of the ten largest economies in the world with nearly 37 million residents and a number of booming industries. Los Angeles remains the world capital of film and television, and Simi Valley in Northern California is one of the country’s most prominent centers for established technology businesses and innovative tech startups. Students flock to California to make their dreams come true, because this state truly is a land of opportunity.

Costs of living can be quite high in the major cities like Los Angeles and San Francisco. But for the cost of living in these places, you’ll get ideal weather, amazing beaches, culture, cuisine, nightlife-everything a great city can offer.

And if you’re not a fan of city living, don’t worry. California is actually mostly desert, farm land, and forest. California is home to eight national parks as well as a number of national trails and monuments. Perhaps California’s most famous park is Yosemite. Yosemite is visited by thousands of campers, hikers, rock climbers, rafters, and nature enthusiasts every year. Its majestic sights include Half Dome, El Capitan, and Mariposa Grove-a forest of giant sequoias, some of the tallest and oldest living things in the world. 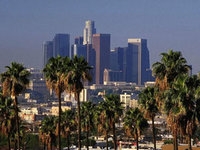 When you come to study in California, you’ll discover that it’s ideal because it has a bit of everything: food and culture from every reach of the world; big cities and little towns; amusement parks and county fairs; shopping centers and farmer’s markets; museums; centers for the arts; nightlife; world religions; and every type of natural wonder, including ocean, lakes, waterfalls, mountains, deserts, forests, caves, islands, marshes, and meadows. California quite literally has something for everyone.

California is also proud to be home to the headquarters of thirteen of the top 100 Best Companies to Work For according to Fortune. These companies include Google, Adobe, Mattel, and Yahoo!. Several other companies from the list have branches in California, including Marriott International, Nordstrom, and S.C. Johnson and Son. The film industry in and around Los Angeles is always in need of creative people, and a number of schools in the area offer training in different film industry positions.

If you are a resident of California interested in earning a college diploma, find a college degree or certificate from an accredited California college or university near you.

No featured schools for California